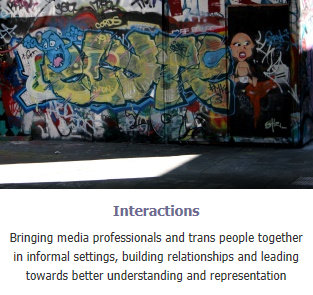 An interaction is a safe, informal, social meet-up between trans* people and media professionals, designed to build relationships, encourage greater understanding leading to better portrayals of trans people in the media.

An interaction allows media professionals to get to know trans* people in a setting of their choice and at their convenience. It is a social meeting where the journalist is not lectured about what to say and what not to say about trans* people, but is invited instead to have an enjoyable 2 hours of conversation with a group of diverse trans* people who will challenge their perceptions, build an emotional connection between both parties and leave them wanting to learn more. It involves anything from a trip to a local attraction, to coffee at their favourite place around the corner from work, to a picnic in the park. To read more about the interactions and what happens during them, read here.

This depends on the volunteer and the media professional they meet with. Often, they keep in touch and this can lead in the immediate to features from trans* writers and journalists, consultations over scripts or even slots on television. Often, a story featuring a trans* person comes up in the news and volunteers can contact media professionals personally if they have concerns, or vice versa. Ultimately, we are building relationships at different points in the media with influential and networked individuals, having a sort of good “ripple effect” that slowly but surely spreads through the media organisations that we are targeting.

3. Why should I get involved?

To help influence media representation, to change attitudes amongst the general public, inspire positive action and contribute to an important movement. To voice your opinion, gain skills in digital media and contribute to an online resource publicly or anonymously. To learn how to confidently engage journalists, presenters, executives and other media professionals positively and to become involved in activism.